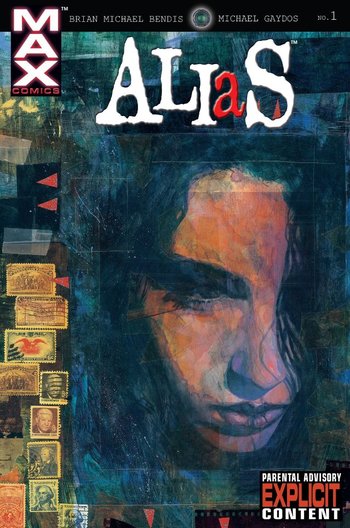 Alias is a Comic Book series created by writer Brian Michael Bendis and artist Michael Gaydos, with covers by David Mack. It launched the Marvel MAX imprint and ran for a total of 28 issues from 2001 to 2004.

Years ago, Jessica Jones put on a shiny costume and became the superheroine Jewel. Then, for reasons that she's reluctant to explain, she quit. Now she works as a private detective to pay the bills. She's eager to forget the past, but somehow her cases keep leading her back to the community she left behind.

The series is known for its focus on Jessica's character development; layers of her past and personality are revealed to the reader as she tries to come to terms with them.

Jessica's powers are rather low-key by Marvel standards. She's tougher and considerably stronger than the average human, and she can fly. But she's not as strong or tough as big names like the Hulk or Thor, and she gets airsick and can't land very well.

Upon the completion of Alias, several characters were moved to Brian Michael Bendis's subsequent series The Pulse. Jessica went on to appear in several other Marvel series, serving as a mentor to the Young Avengers and a love interest for Luke Cage before finally returning to crimefighting as a member of the New Avengers.

The comic series was adapted into a Netflix television series called Jessica Jones (2015) in 2015. The series is set in the Marvel Cinematic Universe, with Krysten Ritter cast as Jessica, David Tennant as Killgrave, and Mike Colter as Luke Cage.

Not to be confused with the J. J. Abrams show Alias. Though both that show and the show which was adapted from this comic were made by what would become ABC Signature.