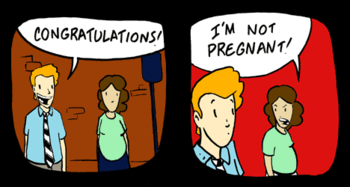 "I'd much rather see a pregnant woman standing up on a bus than a fat girl sitting down, crying."
— Jimmy Carr

A character (usually male) overhears a conversation or finds some evidence that leads him to mistakenly believe another character is pregnant.

If the suspected pregnancy is with his love interest, he will freak out over the thought of being a father. The episode will be about his attempts to cope. He will have accepted the idea by the end and will be mildly disappointed when he finds out that it was a false alarm.

If the suspected expecting woman does not have an established love interest, he will try to determine who the father is. Usually, he will pinpoint some character that she has romantic tension with but is not sleeping with. He will confront the suspected father but will dance around the word "pregnant", leaving the suspect completely bewildered as to what's going on.

In any case, he will walk on eggshells around the not-so-expectant Mom and will tell everyone except his suspects what he thinks is going on. This may lead to some One Drink Will Kill the Baby moments as the poor woman wonders why everyone looks horrified that she's sipping at a glass of wine.

During the course of the episode, everyone will be convinced she is pregnant except for her.

In order for this trope to work, several characters have to be using the Idiot Ball that week. Yet, it may be Truth in Television.

An alternative is when a woman is assumed to be pregnant due to having what appears to be a sufficiently large, protruding stomach (which can lead to extreme awkwardness for obvious reasons), or displays quirks that could be mistaken for stereotypical "pregnancy traits", such as random bouts of vomiting, extreme appetites and Wacky Cravings. Fake Pregnancy is when a woman invokes this trope, usually on purpose (for Pillow Pregnancy, she does so by concealing something under her clothes).