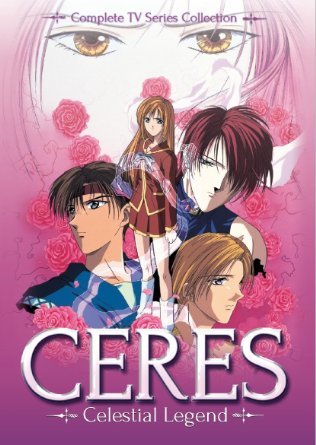 Ceres, Celestial Legend, known in Japanese as Ayashi no Ceres ("Mystery of Ceres"), is a 1996-2000 manga by Yuu Watase. It draws on ancient Japanese myth and mixes it with a cynical modern perspective to produce a dark yet compelling tale of a young girl caught up in supernatural events beyond her control or understanding. It is also one of Watase's darkest, most violent works, featuring several characters with varying degrees of insanity. This manga was a big turning point in Watase's career, and many people consider it to be her best work.

On the day of their sixteenth birthday, Aya and her brother Aki, twins born into the wealthy Mikage family, were driven into their grandfather's estate. Upon arrival, they are made to view a family relic: the mummified hand of their clan's founder. At its sight, Aya starts to manifest a strange aura while bloody images appear on her mind, while lacerations suddenly manifest all over Aki's body. When Aya asks why no one is helping him, her grandfather, supposedly a kindly man, orders her death, disposing of the twins' father when he objects. Suddenly, Aya's aura grows stronger, and in her place appears a blue-haired woman who disposes of her would-be assassins before Aya returns to her body and makes her escape.

Along the way she meets Touya, an amnesiac, crimson-haired young man in her family's employ, who helps her seek refuge in the household of Yuuhi Aogiri, a boy from a well-to-do clan of her age, together with his sister-in-law Suzumi and their retainer Mrs. Q. Suzumi, realizing Aya has the same power as hers (albeit stronger), explains her situation — her clan descended from a tennyo ("celestial maiden")... in particular, Ceres, who was trapped on Earth after losing her hagoromo ("celestial robe") and forced into a marriage, now hell-bent on avenging her misfortunes through her reincarnation: Aya herself. Though initially at odds with each other, Aya strikes a deal with Ceres — she will help the latter find her hagoromo in order to return to heaven, provided she doesn't harm any more people than is necessary. But whereas Aya and Ceres learn to cooperate, Aki is being taken over by his past-life self: Mikagi, the ancestor of the Mikages from thousands of years past, who married Ceres, then went insane over trying to protect her and is now on the hunt for her. To make things worse, the rest of the Mikages, led by Aya's cousin Kagami, are trying to create their own army of tennyos through various scientific methods.

Though not easy, Aya, Ceres and their allies travel across Japan, seeing many places and meeting new friends, enemies and other descendants of tennyos.

A 24-episode anime produced by Studio Pierrot premiered in 2000. It was initially licensed by Viz Media for its U.S. release on VHS and DVD, and has since been licensed by Discotek Media for a DVD rerelease.