All spoilers will be unmarked. You Have Been Warned.

Aya is a normal, everyday highschool student and loves spending her time in karaoke bars with her brother and friends. The day before her 16th birthday, she falls from an overpass and into a busy street, but gets rescued by a mixture of strange, bloody memories and a kind, strong man.

On her 16th birthday, she and Aki are shown a mummified hand that belonged to their family's ancestor, Ceres. Seeing it causes Ceres to awaken within Aya. She was supposed to be killed by her relatives, but Ceres' power killed them, and Aya fled.

Aya wants to return to being a normal student and tries to keep Ceres contained. As she comes to a mutual understanding with Ceres, she vows to take revenge on the Mikage clan. 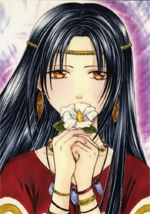 Ceres is a celestial maiden and one of the ancestors that resulted in the Mikage clan. Her past is akin to the Swan Maiden legend. She took off her celestial robe and set it aside to take a bath, when a man took and hid the robe. Asking him about it led to him denying knowing anything about it and, as she could not ascend back into the heavens without her robe, she remained on earth with him. Unfortunately, her version included the man raping and forcing her to bear his children.

Ceres gets reincarnated into the daughters of the Mikage clan every so often and her powers awaken inside of them on their 16th birthday. She wants to take revenge on the Mikages for what occured to her in the past, but the clan chose to kill their daughters, if they showed signs of having Ceres' powers.

When she gets reincarnated into Aya, her powers allow Aya to escape and surive.
Ceres tried to completely take over Aya's body, but she proved to be too strong and kept a tight grip on her for a while. As the series progresses, the two begin to talk and come to a mutual understanding, with Aya allowing Ceres free rein over her body, when the need arises. 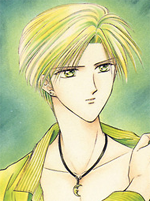 Aki is a typical highschool student, just like his sister. Just like Aya, he was shown the mummified hand and ended up reacting to it himself, getting numerous wounds on his body. This showed that he was the closest to the Mikage clan's ancestor, the man who wed Ceres and made her his.

When Aki realizes that he and Aya cannot be together until the issue with Ceres has been cleared, he tries to undergo experiments to recall his memories of the Ancestor, in hopes of finding out where her celestial robe is and allow her to leave. As the Ancestor's memories surface and mix with his own, Aki tries his best to remain himself.

Touya is a man with no past, present or future. He lacks any memories of himself, beyond the name 'Touya' and 'Mikage'. With them being his only lead, he headed to the Mikage clan and offered his services to them in any way they needed, as long as they helped him regain his memories.

As a hired goon for the Mikages, he was initially tasked with finding and capturing Ceres, before this was expanded to capturing any celestial maiden he might encounter. After he admits to himself that he cares for Aya more than his memories, Touya escapes the Mikage facility and chooses to live on his own, and hopefully find out about himself in a different way. 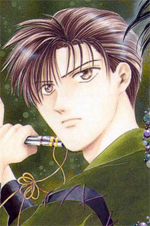 Yuuhi is a highschooler, just like Aya and Aki. He lives with his sister-in-law and Kyuu in a large mansion, away from the main Aogiri estate. He is the mainchef of the household and is a superb cook, dreaming of one day opening a restaurant and running it with his wife.

Suzumi sent Yuuhi to the Mikage estate, in order to have him rescue Aya and bring her to them. While she offers not only a home to Aya, she also tells Yuuhi to become her bodyguard and even gives him wristbands and a headband imbued with her own celestial maiden powers. 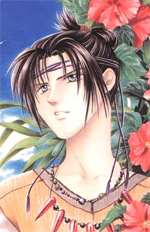 The ancestor of the Mikage clan, whose name originates from his name: Mikagi. He found a bathing Ceres and managed to get her to become his wife and bear his children. In the end, he suffered dozens of severe injuries on his body and died from bloodloss. When Aki saw Ceres' mummified hand, Mikagi revealed himself inside of him and Aki suffered the same wounds, yet survived.

Mikagi ends up taking over Aki's body for a good portion of the series, as Aki cannot manage to contain him indefinitely. He is obsessed with being reunited with his wife and doesn't care that her current vessel is his current vessel's fraternal twin. Mikagi alone knows where Ceres' celestial robe is and, unlike the man in the Swan Maiden legend, was very careful to never even let his children know of its location.

Kagami is a cousin to Aya and Aki. He seems to be the right-hand man of his grandfather, who is the head of the Mikage family, but is quickly revealed to have a different goal in mind. He tells Touya to not kill Aya, but instead capture her, so he can learn more about her mysterious powers.

Kagami eventually calls the Celestial Project into life. He hands out medicine created from the strange cells found in Ceres' blood sample, to awaken the celestial powers in any maiden's descendants. Once he obtains the entire mummified corpse of Ceres, he manages to mass-produce the medicine and puts it into Japan's water supply, and gets descendants from all over Japan to awaken.

Alexander has a multitude of duties. He was the scientist in charge of helping Aki regain his memories as the Ancestor, and gave Touya the various memory discs that allowed him to infiltrate schools and hospitals as a doctor on his search for celestial maidens. He's generally referred to as Alec.

Gladys works as Kagami's secretary for the C-Project and is eventually shown to be as good as in charge of the C-Genomers at the headquarters. She often is the one to calm the newly arrived C-Genomers and help them get accustomed to their new environment.

Wei is hired to be Aki's bodyguard alongside Touya, though both assumed they were the only one. He's also a professional assassin. After Touya goes rogue, Wei feels a personal vendetta against him and wants to personally kill him.

Rurik is responsible for the bio-science department of the C-Project.
He also aids Alec and seems to be good friends with him.

Assam is a child soldier, hired for the C-Project after Touya went rogue. He's supposed to look for awoken celestial maidens, but doesn't care much for that. He becomes obsessed with causing pain to Touya, after he injured his leg. 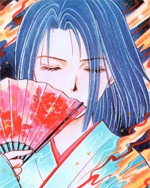 Suzumi sensed Aya's powers as a celestial maiden and sent Yuuhi out to get her, trying to keep her safe from the Mikage family. She is the descendant of a celestial maiden herself, though she has kept this a secret from most people. She planned to run a school teaching traditional dance with her husband and runs it on her own, after Kazuma died. 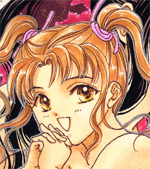 Chidori found Aya and Yuuhi, based on a picture she took of them, although Ceres was in possession of Aya's body at the time. She begs them to come to the hospital with them, so they can encourage her little brother to regain hope about his injured legs again. She turns out to be a celestial maiden, whose appearance changes drastically when her powers are in use. She moves in with the Aogiris and helps the search for a celestial robe. 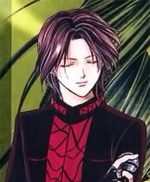 Shuro was a member of the famous GeSANG duo, the other being her cousin Kei. She reveals in a TV interview that she and Kei are descendants of a celestial maiden and that their family has one's robe. Trying to get Ceres to leave with a celestial robe, Aya and the others head to Okinawa to meet Shuro and ask for her help.

She and Kei end up reacting to their celestial powers awakening, but Kei dies shortly after. Shuro stopped performing for a long time, but eventually chose to go on, while still pretending to be a guy. She reveals her actual gender to her fans during her final concert. 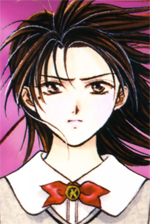 Miori is a schoolmate of Aya, Shuro and Yuuhi, when they head to the Kaisei highschool. She claims to be Touya's childhoodfriend-turned-girlfriend, who regains his memories of his life as Touya Mizuki when seeing her.

As the memories turn out to be fake, Miori admits to being a willing pawn in the Mikages' plans and that her goal was always Aya. She holds a grudge against her and wants to take revenge. 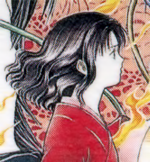 Yuki is a classmate of Aya and Yuuhi. She's physically weak and very quiet, often also bullied by classmates. She has an affair with her physics teacher, Hayakawa, and is terrified when Aya figures it out. When Yuki believes that Aya betrayed her, her powers as a celestial maiden awaken and she runs rampant in school, searching for Aya. 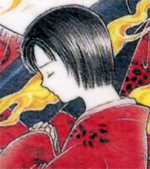 Maya is the class representative of one of the schools Aya and Yuuhi head to. She's the descendant of a celestial maiden, who was accompanied by a white dog in this version. Maya herself owns a golden retriever dog, but her celestial powers manifest themselves in the form a giant, vicious, white dog that she unknowingly sets upon people that she dislikes.

The household retainer of the Aogiri household.
She's... Oda. Jokingly referred to as Oba-Q.

Shouta is Chidori's younger brother and was a patient in the Tochigi prefecture hospital during the C-Project induced 'illness'. His legs have been paralyzed since the accident that killed his parents, and thinks it's hopeless that he'll ever get better. He manages to strike up an odd friendship with Touya while at the hospital. Shouta eventually does choose to go through physical therapy and regain the useage of his legs.