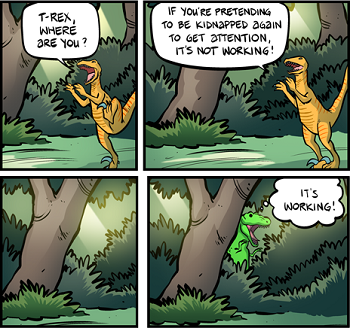 People are willing to do anything for the safety of a friend or loved one. If you're the friend or loved one, you can play this to your advantage for material or emotional gain. All you have to do is "disappear," leave a ransom note, and everyone will think you're being held captive. The best part is you don't have to put yourself in actual danger to get the benefits of people going out of their way to save you.

There are quite a few reasons for doing this. Perhaps you need money, but nobody would give it to you if you just asked. Or you need the MacGuffin, but seeing as it's so valuable, no one would give it to you either except to save a member of the team. If you're The Mole, this can be used to lure the good guys into a trap as they come to rescue you. (See also the Trojan Prisoner and the Play-Along Prisoner.) Finally, some people do this for fame and attention, for the same reason some fake their death and attend the funeral to see who really cares about them.

One should choose any accomplices in the scheme very carefully, otherwise it could quickly become a real kidnapping or worse.

As this trope is a Plot Twist, there are spoilers ahead in the examples.