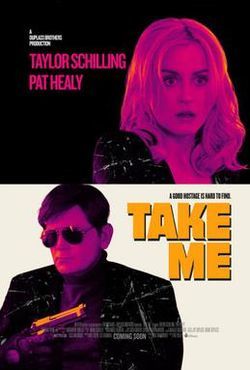 Take Me is a 2017 comedy film directed by Pat Healy, written by Mike Makowsky, and starring Healy opposite Taylor Schilling, along with Alycia Delmore and Jim O'Heir. The plot of the film is that Ray Moody (Healy) is an enterprising small businessman who does mock kidnappings, scenarios where a client pays him to abduct and kidnap them for various reasons ranging from forcing them to break a bad habit to living out a power fantasy. Ray gets an unusual request for a full weekend job (his usual job is for only eight hours), to abduct a bank employee named Anna St. Blair (Schilling), with a rider that he's expected to slap her around. The abduction goes successfully, and he concocts a plot where he's ostensibly kidnapping her to extract information about one Mr. Schwentke. She, understandably, has no idea what he's talking about. And then she manages to escape long enough to stab him. And then the police show up. And Ray learns that Anna apparently has no idea what's going on, and thinks she's legitimately been kidnapped... and then things get worse.