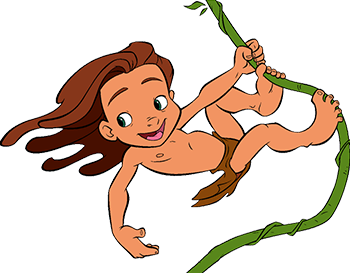 The usual way of transportation of a Nature Hero: grab a conveniently placed, always available vine on a tree, and swing on it to the next one. Very common in Jungle Opera settings or in Jungle Japes levels of video games.

In fiction, these vines will usually be portrayed as flexible as ropes. In Real Life, those that are strong enough to carry the weight of a human are much more stiff.

Often used as a Stock Shout-Out to the Trope Codifier, Tarzan; the character swinging on the vine often makes the ape-man's unique yell.

Compare Building Swing, which is this done in a more man-made environment, usually with ropes, and Chandelier Swing, the indoors, swashbuckling counterpart.

When you do it, you need to Watch Out for That Tree!.

Mario swings on a vine to get away from the Paper Macho Chain Chomp.

Mario swings on a vine to get away from the Paper Macho Chain Chomp.