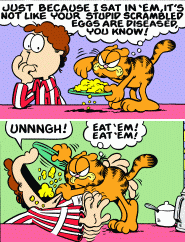 Exactly What It Says on the Tin. Sometimes considered an example of Cold-Blooded Torture. Can be Played for Laughs.

A person is restrained and possibly put into a straitjacket, or strapped to a chair. A funnel/tube may be put in their mouth and something like raw eggs mixed with milk or some other yucky (or worse, poisonous/plagued/rotten) mess is forced down the victim's throat into their stomach, possibly causing their stomach to get bigger as the torture continues. Sometimes, there is no physical force involved at all because in that particular case, threats are just as effective. May cause Nausea Fuel, for both the person being force-fed and for people actually watching it happen. And, of course, Nightmare Fuel should not be ruled out ... nor should fetish. Its potential consequences are both obvious.

Alternatively medication or drugs may be force-fed, either by medical staff or untrained captors.

Note that an Orifice Invasion through the mouth is a different thing. And then there's the exact opposite, starvation. Many times this can work in tandem (starvation for a week, then force fed several times a day for a week). May be used if prisoners attempt a hunger strike, or as a means of Fattening the Victim.

Compare with Food Interrogation; that trope may lead to this one if the perp refuses to eat the food. Compare also Feed It a Bomb.

Jack of All Tradies

When the Tradies are starting to lose, they merge together to form a superbeing known as Jack of All Tradies.

Example of:
All Your Powers Combined

Jack of All Tradies

When the Tradies are starting to lose, they merge together to form a superbeing known as Jack of All Tradies.