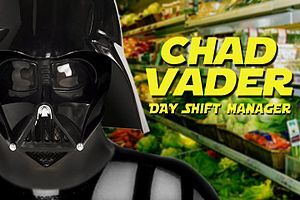 Welcome to Empire Market.
Chad: May I speak with you a moment, my master?
Randy: It's just Randy, okay Chad?
Chad: Yes, my master.
Advertisement:

Chad Vader is the younger brother of the more famous Darth Vader. Due to not being quite as authoritative and charismatic as his sibling, instead of conquering the galaxies, Chad works as the day shift manager at Empire Market, a grocery store in the US. The show follows Chad's daily life trying to get along with his co-workers, who consider him a rather rude fellow, possibly due to his strange voice and his habit of force-choking those who annoy him.

The series is produced by Blame Society Productions, an enterprise consisting of Aaron Yonda and Matt Sloan, which has also made a wide variety of other clips that can be found on their YouTube channel

or on their official homepage

. He was also a guest riffer

for RiffTrax for Star Wars Episode II: Attack of the Clones and Episode V:

The Empire Strikes Back.