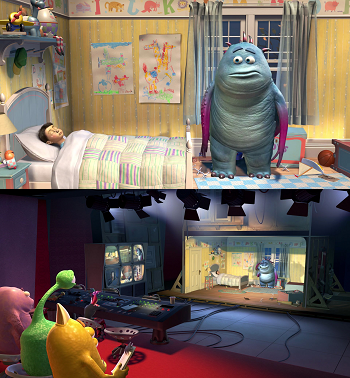 The moment when a scene that we're watching—thinking it's an event that's really happening within the world of the story—is revealed to be a part of a show within the show, or some kind of simulation that the characters are involved in. Examples could be a director calling "Cut!"; a line flub or dialogue prompt; the disappearance of the scenery to reveal an otherwise empty room; the sudden appearance of a camera or sound crew, or a pan, zoom or cut that reveals that the action is occurring in a theatre, on a soundstage, in a classroom or on location.

A Proscenium Reveal may end a Danger Room Cold Open, a Fake Action Prologue or the Unwinnable Training Simulation. In a Music Video, it can indicate that we've been On a Soundstage All Along.

When done accidentally In-Universe, it often means the hero just ruined the shot.

Compare with Nested Story Reveal. Not to be confused with Breaking the Fourth Wall, in which the characters acknowledge their fictional status and/or the existence of the audience (i.e., you).

Note: Proscenium reveals can be Mind Screws for the audience, especially if they occur late in the proceedings. (David Lynch, we're looking at you.) When citing such cases, consider tagging for spoilers.

What appears to be a failed match between Buzz and Zurg is actually Rex playing a video game.

What appears to be a failed match between Buzz and Zurg is actually Rex playing a video game.