Web Video / Welcome to the Basement

"I've gotta bunch of movies that I've never seen before. You don't know what they are. Every episode I'm gonna spring one on ya; it might be good, it might be bad. We'll watch it, and talk about it. Welcome to the basement."
— Matt Sloan, opening narration 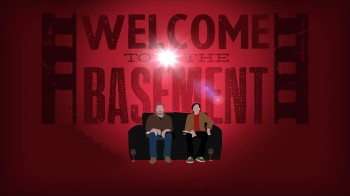 , created by co-founder Matt Sloan. The series stars Sloan as the preponderant host; with close friend and Chad Vader alum Craig Johnson as his Second Banana; the former's wife, Tona Williams, as the unseen though equally as involved camera operator; and a plethora of thespians and other entertainment industry veterans - both living, dead, B-rated and otherwise. Oh, and Matt's cats.

As the page quote outlines, the premise of the series is Sloan and Johnson watching a diverse selection of films from the cinematic past – from the Hollywood mainstream to the quirkiest cult classics — and having a thoughtful discussion thereafter. Craig never knows what the movies are until Tona starts rolling, so it’s always as much a surprise to him as it is the audience. On occasion, the two switch roles, and Matt has also twice employed a third party to curate an episode by picking a film from his "secret list", as well as awarding them with the bonus of getting to replace it with whichever movie they so desire (so long as it has gone unseen by his eyes).

, which regularly provides updates for the show.