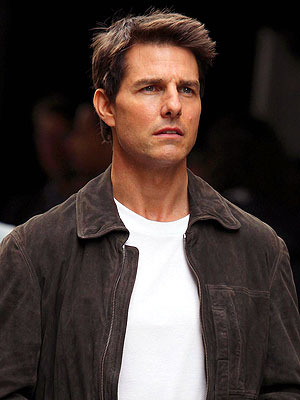 Nobody looks like that at 60.
"Tom Cruise is an amazing actor and generous co-worker whose personal life we, as a society, know far too much about."
— Mikael Nyqvist note To pretty much every Swedish news-outlet the months around Mission: Impossible – Ghost Protocol
Advertisement:

Forbes magazine ranked him as the world's most powerful celebrity in 2006. During his career, he has been nominated for three Academy Awards and won three Golden Globe Awards. His first leading role was in Risky Business, and since then he is known for playing cocky, charismatic heroes, although sometimes stepping outside his comfort zone. He's famous for his dedication to the job, every action film starring him has him either driving, motorcycling, flying, climbing, acrobatics and running. And he does the majority of these stunts himself, not relying on stunt doubles for them. Especially

his running, which happens in nearly every movie.

Every few years he attracts some attention through some unusual antics that put him into the tabloids, such as his outspoken adherence to the Church of Scientology; and his high-profile marriage to Mimi Rogers (who was the one to introduce him to Scientology), his high profile marriage to Nicole Kidman, high-profile relationship with Penélope Cruz, and high profile marriage to Katie Holmes, which all slowly fell apart. He is generally very friendly, but his intensity leads to some Memetic Mutation moments in interviews that take time to dissipate. Including jumping on Oprah's couch on her show telling her how much he loves Katie Holmes.

Despite all the crazy, Cruise is considered a genuinely good - sometimes even great - actor with some great films and powerful performances under his belt. He has remained an A-list actor since the '80s, something very few can claim, starting around the time of Top Gun. He opened the 2002 Oscars — just months after 9/11 — and gave a memorably appropriate and heartwarming opening speech as well, called "A Little Bit of Magic". Finally, even entering his 60s, he remains Hollywood's preeminent Pretty Boy.

He is the first cousin of actor William Mapother. They have played together in some films.