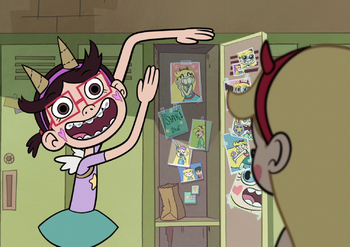 "I wallpapered my locker with pictures of you!"
Advertisement:

The stereotypical fangirl is a girl who loves a story/series for one or more of the male characters. They have existed for longer than you may think: the David Duchovny Estrogen Brigade was a terrifying force on The X-Files' group on Usenet. The term has since widened beyond that stereotype to include girls who are merely fans of something or other.

It is not always a pejorative term but it can be among people who don't "get" a particular fandom. Most folks today use the term to mean nothing more than a female nerd. Someone describing herself as a fangirl is usually expressing enthusiasm for the subject.

See Groupie Brigade if they come in swarms. If the fangirl is a fan of a villain, see Monster Fangirl. If the fangirl takes her fangirling to disturbing levels, she's a Loony Fan, not this trope.

See also Estrogen Brigade, Squee, and Groupie. Approximately the Distaff Counterpart to Fanboy, though the two types of fan have sufficiently different stereotypes that it would make sense to describe a boy as a fangirl, or vice-versa.