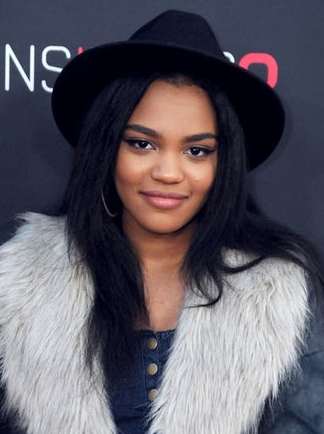 Her crush has got to be the real thing, 'cause she's Exceptional.
Advertisement:

China Anne McClain (born August 25, 1998 in Decatur, Georgia) is an American child actor and singer. Her father and mother are singer-producers. She has two older sisters who are also actresses. China's career began in 2005 when she was 7 years old, in the movie The Gospel. Although she became nationally known since 2007, when she joined the cast of the series Tyler Perry's House of Payne as Jazmine Payne, she is now internationally known for her role as Chyna Parks, the star of the Disney Channel Original A.N.T. Farm. She also stared in How To Build A Better Boy with Lab Rats star, Kelli Berglund.

Currently, her recent roles are Freddie (until her sister Lauryn took over in the 2nd season) in Descendants: Wicked World and as Uma in Descendants 2.

In 2018, she began appearing on The CW's Black Lightning (2018) (based on the DC Comics character of the same name) as Jennifer Pierce, the youngest daughter of Black Lightning who eventually becomes the teen superhero known as Lightning. In 2021, she announced she's taking a step back away from acting, and more towards music and producing content in the wake of the death of her close friend, Cameron Boyce.