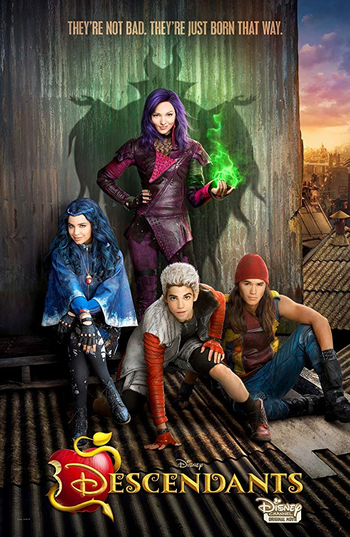 Everybody knows that one of the key elements of the Disney Animated Canon is its Rogues Gallery, one of the most iconic sets of villains in all of Western Animation. We know them, and we know their histories. But what we don't know is their children. Are they themselves just as evil as their parents? Or are they simply doing what is expected of them? Can they break free of parental influences and carve their own path? Leave it to Kenny Ortega to answer that question in the form of Descendants, a Disney Channel Original Movie that premiered July 31st, 2015. It stars Dove Cameron, Sofia Carson, Cameron Boyce, and Booboo Stewart.

The story is set in the United Kingdom of Auradon, a merging of all the various locations established in the various DAC films. A form of paradise, where all the "heroes" and associated friends and family live in peace. Of course, where there are heroes, there are villains, and those who filled that role are exiled to the Isle of the Lost, a place where magic is unusable, and have been scratching out a living ever since. In both places, life goes on, families begin...

With his coronation as king approaching soon, Belle and Beast's son Ben decrees that the children of the most notorious Disney villains (Maleficent, the Evil Queen, Jafar, and Cruella De Vil) should be allowed a second chance by attending the kingdom's Elaborate University High.

Seeing it as an opportunity to get revenge, Maleficent and co. send their children — Mal, Evie, Jay, and Carlos — to obtain the Fairy Godmother's magic wand for their evil purposes. However, their children become torn between obeying their parents, or escaping their shadow to become better people; as mentioned, are they evil by birth, or are they just raised that way?

A sequel premiered on July 21, 2017, simultaneously on Disney Channel, Disney XD, ABC, Freeform, and even both Lifetime and Lifetime Movies, taking place six months after the events of the film. After Mal cracks under pressure and returns to the Isle of the Lost, Ben and the other Villain Kids must race to save her from herself and from the new leaders of their turf: Uma (daughter of Ursula), Harry (son of Captain Hook), and Gil (son of Gaston).

The third film premiered on August 2nd, 2019. This one involves Audrey, the daughter of Sleeping Beauty, who after serving as an Alpha Bitch in the first film and being completely absent in the second film, finally comes back with a vengeance and calls upon the darkest magic in Auradon to exact revenge. The film also sees the revelation of Mal's father: Hades, who apparently seeks revenge for being imprisoned on the Isle when he didn't want anything to do with either party. It was led-in by the featurette, Under the Sea: A Descendants Story, which aired on September 28, 2018. The third film is also notable for being the last major film role for Cameron Boyce before his untimely death on July 7th, 2019, less than a month before its premiere.

The film has had several other works based on it, though the canonicity of them compared to each other is nebulous at best:

Not to be mistaken for the film The Descendants.

Rotten to the Core

Rotten to the Core