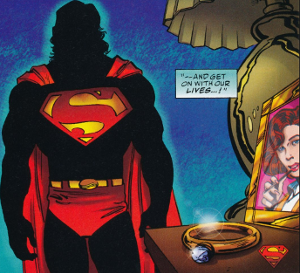 The Superpower Lottery has no defense against heartbreak.
Donna: Are you breaking up with me?
Eric: Are you giving me back the ring?
Donna: Yes.
— That '70s Show, "The Promise Ring"
Advertisement:

The ultimate sign that a relationship is over is when the ring is given back in some manner. It's usually the woman returning it to the man as an inverse of the man offering it during the initial proposal, and despite the name can just as easily be an engagement ring instead of a wedding ring.

The symbolism of this trope is readily apparent to the point it's not necessary to verbally state a relationship has ended when it's used, making it a good example of Show, Don't Tell. Depending on the characters involved and the level of sympathy the audience is expected to feel for them, the one doing the returning may be portrayed as either trying to be gentle or rubbing salt in the wound, particularly if the ring is simply left for their partner to find, often accompanied by a Wham Shot with or without a "Dear John" Letter left with it to explain their reasoning for the breakup. In person versions may either be handed back gently, dropped on the ground or physically thrown at their partner.

Compare Wedding Ring Removal, Wedding Ring Defense and Lost Wedding Ring, which all involve using the ring in other contexts. Related to Take Back Your Gift, which may include a ring but can cover other types of presents as well.