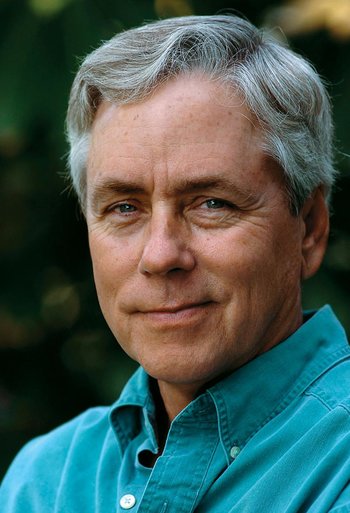 "With or without me, Florida will always be wonderfully, unrelentingly weird"
— Headline of Hiaasen's farewell column for the Miami Herald, March 15, 2021
Advertisement:

A native of perhaps one of the more... eccentric states in the Union, Carl Hiaasen (born March 12, 1950) has built his career writing both on the fictional and real-life exploits of the citizens of Florida. Known for a strong sense of black and satirical humor, many of his novels involve situations that he insists isn't that much of a stretch for his fellow Floridians: from a crook being beaten with a frozen lizard to a particularly ornery and sexually deviant dolphin to a female lead that continually has two songs clashing in her head, his novels are filled with all manner of colorful individuals. Notwithstanding the more colorful of their type and behavior, Hiaasen's books usually contain recognizable yet unstereotyped characters that are often criminal, eccentric, mentally ill or challenged, etc., yet still make endearing protagonists, whereas his villains are the sort of individuals for whom his imaginative fates can be seen as richly deserved.

Works by Carl Hiaasen with their own pages include:

Other works by Carl Hiaasen contain examples of: