Manga / Fly Me to the Moon 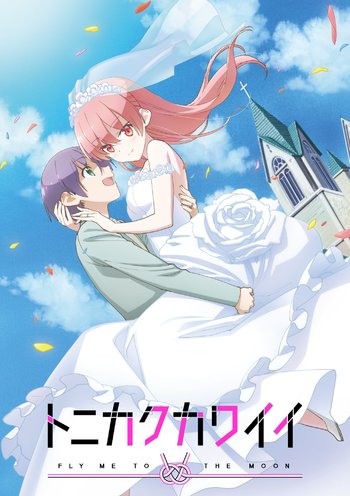 "You don't get married because you've proven you're in love. You get married so that you can prove it."
— Nasa Yuzaki
Advertisement:

Of all the names his parents could have given him, Nasa Yuzaki despises his own. Wishing to get rid of the mockery he's been subjected to since he was a child by teachers and peers, Nasa studies hard to get to the best high school in the country. The night before his entrance exams, he becomes entranced by the sight of a girl across the street while walking home, not knowing there's a truck at an intersection. Thanks to the girl's intervention, Nasa survives the collision, but is heavily injured. However, he can't help but confess this is Love at First Sight for him, as Nasa believes he may never see her again, and asks her if she will be his girlfriend. After a brief moment, the girl agrees, on the condition he marries her first. Nasa agrees to her conditions, then falls unconscious and awakes in the hospital, but the girl is long gone.

Following his recovery, Nasa decides to forgo high school and works for the next few years, acquiring enough money to move out of his parents' home and into his own apartment, continuing to believe he will have a chance at seeing the girl again. Just as Nasa turns 18 years old, the girl, 16-year-old Tsukasa Tsukuyomi, appears on his doorstep with a marriage registration form. Their new life as husband and wife is just getting started.

Fly Me To The Moon (also known as Tonikaku Kawaii/トニカクカワイイ or TONIKAWA: Over The Moon For You) is a weekly Romantic Comedy Shounen Manga written and illustrated by Kenjiro Hata (creator of Hayate the Combat Butler). Published by Shogakukan in Japan for Shonen Sunday and VIZ Media in western countries, the series received an Animated Adaptation on October 2, 2020, with Crunchyroll streaming it on their website.