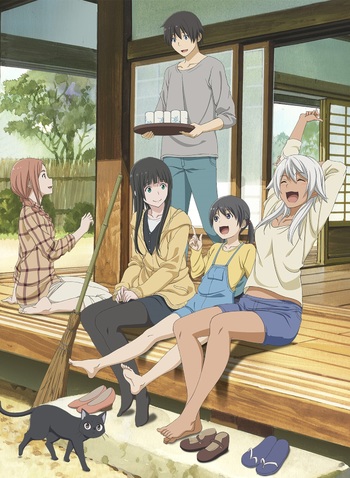 Magic makes every day colorful!
"Flying in the sky and looking down on this city, with everyone, things look different, it’s so magical."
— Shan-ran-ran, Flying Witch Opening Theme
Advertisement:

Flying Witch (Hepburn ふらいんぐうぃっち) began in 2007 as a one-shot manga by Ichizuka Chihiro. It later began serialization in 2012 in Bessatsu Shonen Magazine as an ongoing series released bimonthly (~6 chapters a year). A twelve-episode animated adaptation of the serialised manga aired in April 2016 as apart of the Spring 2016 Anime line-up. Produced by JCStaff and directed by Katsushi Sakurabi Flying Witch is available for viewing

on Crunchyroll. Besides the twelve episode anime, there is also a set of shorts, titled Flying Witch Petit, accompanying the series. These CG shorts are posted on the official YouTube channel of distributor VAP and later were bundled as a part of the Blu-Ray volumes.

Fifteen-year-old Makoto Kowata moves from her parents' home in Yokohama and to live with her relatives in Aomori. While outwardly an Ordinary High-School Student, Makoto's involvement in witchcraft differentiates her from her peers: she moves to further her studies as a witch, and picks Aomori because of the abundant nature in the area. Moving in with her second cousins, Kei Kuramoto and his little sister Chinatsu, Makoto begins life in Aomori. However, things are rarely dull for Makoto: she is attuned with magical entities, and over time, begins introducing her friends and family to the magical things she encounters in her training. As she spends time in Aomori, she befriends Nao Ishiwatari, one of Kei's friends who helps run her family liquor store, and Inukai, a fellow witch cursed with the appearance of an anthropomorphised dog who specialises in fortune-telling. While life in Aomori might be quiet for Makoto, there is no shortage of adventure to be had as she explores avenues for her training as a witch.