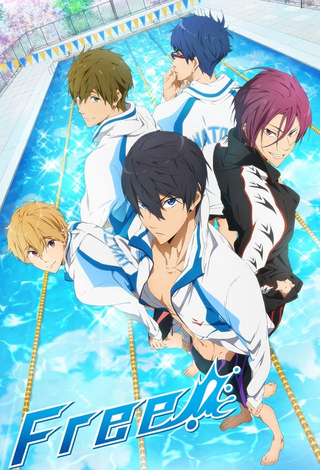 Let me show you what makes you and I different!
Advertisement:

Free! is an anime by Kyoto Animation that is a Sports Story surrounding the lives of High School swimmers. It premiered on July 3, 2013 and it is based on High☆Speed! (2013), a novel by Kouji Ouji. The novel was originally entered into the 2nd Kyoto Animation Award contest and received an honorable mention. A commercial released

before the series was officially announced gained a sizable fanbase on both Tumblr and Pixiv due to the shirtless Bishōnen featured. The show was quickly dubbed "Swimming Anime" before its actual name was revealed. It is co-produced by Animation Do (the Osaka subsidiary of KyoAni), and is directed by Hiroko Utsumi (marking her directorial debut) with Masahiro Yokotani serving as series composer, and Futoshi Nishiya as character designer and chief animation director.

When he was young, gifted freestyle swimmer Haruka Nanase competed in an elementary school relay team with his childhood friends Makoto Tachibana, Nagisa Hazuki and Rin Matsuoka. After winning a championship together they parted ways, with Rin leaving the country to follow his dream of reaching the Olympic level.

When Rin returns years later with a nasty new attitude and a major grudge against Haruka, his reappearance sets in motion a series of events that lead to the founding of the Iwatobi High School Swimming Club. Along with Makoto, Nagisa, rookie Rei Ryugazaki and the club's manager as well as Rin's younger sister Gou Matsuoka, Haruka reawakens his passion for competitive swimming in the hope of getting through to Rin.

The media distribution service Crunchyroll is streaming the series under the name Free! - Iwatobi Swim Club

(they've also sub-licensed the show to Discotek Media for a DVD release, but this seemed to change, due to Crunchyroll announcing at Anime Expo 2016 that they are doing their own Blu-ray and DVD releases

The series was successful enough to include sequels and movies, which include:

Tropes present in Free! include: