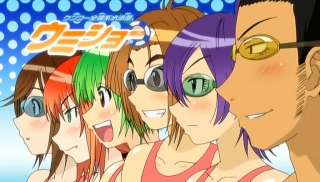 Kenko Zenrakei Suieibu Umisho — the title translates to "Healthy Naked Swimming Team Umisho", which, besides being a Word Salad Title, is a more than apt description of the show. Umisho is a Sports Story that revolves around the Umineko Shougyou Swimming Club and their highly unusual teammates as they make their way to the top of the tournaments and engage in wacky Day in the Life moments in between.

Kaname Okiura ("Okky" to some) is the manager of the Umisho swimming team, except that he can't actually swim. The team is in need of members, and that's when newcomer Amuro Ninagawa and her floating house pulls up to shore. Amuro has a hobby for nude swimming, and turns out to be quite proficient at it, having lived her whole life on the sea. She joins the swimming club, and things start from there.

The manga was serialized in Weekly Shonen Magazine from 2005 to 2008, and compiled into nine volumes. A thirteen-episode anime adaptation aired in 2007.