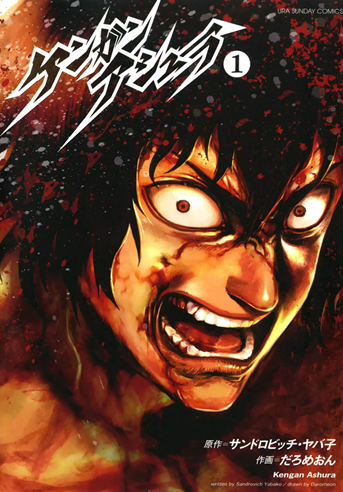 Ohma Tokita, the "Ashura" and a small fish in a big pond.
"You wanna fight, too?"
- Ohma Tokita
Advertisement:

Kengan Ashura is a manga series written by Yabako Sandrovich and drawn by Daromeon,note One might recognize his art from Ketchup Ninja beginning publication in 2012 it runs in Ura Sunday, a Shounen Magazine, published by Shogakukan.

When Kazuo Yamashita, a 56-year-old underachieving salesman, stumbles across the mysterious young Ohma Tokita easily taking down a musclebound yakuza twice his size, his world gets set to be turned on its head.

The following day, Kazuo is summoned by the Nogi Group's CEO, Hideki Nogi, who introduces him to the world of the Kengan Association matches: a place where wealthy business owners, corporation leaders and merchants hire gladiators to fight in unarmed combat where the winner takes all. With Kazuo being reacquainted with Ohma, the latter of whom has become the Nogi Group's latest fighter, the two's journey into the Kengan world begins. Several bouts into Ohma's careers, the eccentric leader of the Kengan Association Katahara Metsudo announces his desire to see things shaken up in the organization- by hosting a tournament of the best fighters in the business, with the winner being given anything they want and the CEO they represent being given chairman position in the organization. Kazuo and Ohma are entered on behalf of Nogi, and so begins a long-running Tournament Arc that sees Ohma's shady past slowly be brought to light.

In May 2015 the series won a poll organized by Ura Sunday in which the winner would become eligible for getting an Animated Adaptation, Kengan Ashura got more than 2 million fan votes, winning. The anime adaptation by Studio Hibari and Larx Entertainment premiered on July 31, 2019 on Netflix.

The sequel, Kengan Omega, set 2 years after the original series, began publishing on January 31, 2019. Set two years after the events of the previous series, Omega stars two newcomers: the brutal street fighter with natural talent Narushima Koga, and the mysterious and aloof Gaoh Ryuki. Both find themselves drawn to the world of the Kengan Matches after a chance encounter with Kazuo, who decides to mentor both fighters after seeing hints as to their potential. Unfortunately for him (and the rest of the association), rival underground fighting ring Purgatory is looking to acquire the Kengan Association for their own purposes, and challenge the Kengan fighters to thirteen rounds in a one-on-one tournament in Purgatory's home turf. As Koga and Gaoh gear up for the fight, it becomes increasingly clear that a mysterious third party known only as "The Worm" has a vested interest in interfering with the battle between the two groups- and their sights have been set on Koga and Gaoh...

Compare to Baki the Grappler. Kengan Ashura shares some similarities to the early beginnings of Baki and both protagonists are similar in design and personality.

See also How Heavy Are the Dumbbells You Lift?, a more light-hearted manga series set in the same universe and written by the same author, though under a different illustrator.