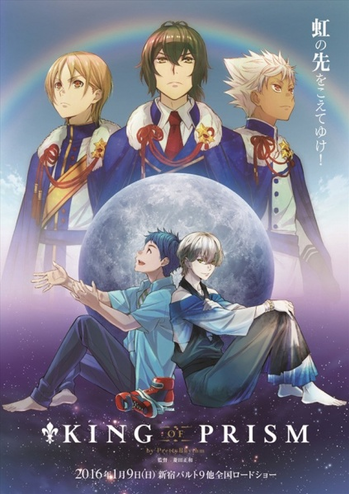 It's been one year since the Over the Rainbow boys made their mark, and now everyone is trying to get into Edel Rose to be like them. Their latest focus: the Prism King contest, an event held every four years to crown only the most dedicated and appealing of young male performers. Suddenly Edel Rose met with a serious opponent in another idol school — Schwartz Rose, who also wants to compete for the title. Who will come out on top? Who will take the coveted quadrennial prize? Who will make the ladies swoon the most? And what is Schwartz Rose's deal?

King of Prism is a male spinoff of the Pretty Rhythm: Rainbow Live anime and a part of the larger Pretty Series franchise, taking place 1.5 years after the events of the last episodes of the former. The movie was first teased in PriPara The Movie before being officially announced later in 2015. The movie was first seen in theaters in January 9, 2016, selling an amazing 600 million yen overall at the end of its run, and 30 million in the first month alone. It proved so popular with audiences that a sequel was immediately considered and greenlit, with King of Prism: Pride the Hero opening in July of 2017. The series also received a novelization, a mobile phone game titled King of Prism: Prism Rush! Live in 2017 which largely keeps the same writers as Rainbow Live, a stage play, and a manga spinoff series, King of Prism by Pretty Rhythm Party Time.

The series, as is the case for many idol franchises, got its own concert in 2017. Titled "King of Prism Super Live Ready Sparking!", it features all of the actors from the first two movies, singing the songs featured in them.