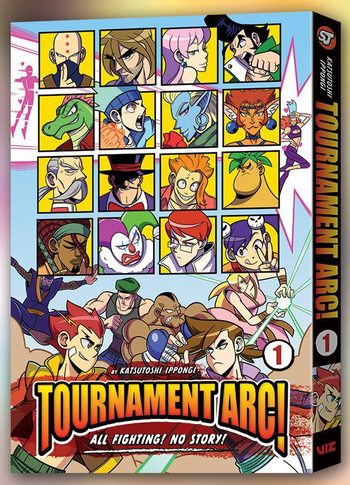 "The tournament is divided into three distinctive rounds: teams, doubles, and singles. Age and school year are irrelevant. In this tournament, the only attribute being tested... is skill."
— Dr. Oobleck, RWBY, "Round One"
Advertisement:

Plot arc consisting of the character in direct competition with other characters in a generally organized fashion rather than a "fight of the week" situation. The fighting can be whatever relevant competition exists for the show, whether it be martial arts or bread making. It can even be The Tourney, the original tournament. If the tournament is being used for something sinister behind-the-scenes, then this is Not Just a Tournament.

From a broadcaster's point of view, tournaments are extremely useful as filler to avoid catching up to the source material and can be used to give Character Development to otherwise underused characters. They can also allow a writer to introduce a substantial number of new characters very quickly, some of which potentially may become regulars if they gain a sufficient fandom. Another benefit is that it can be used to showcase otherwise impossible fights (such as ones between two members of the same team).

However, because they are easy to make filler with, tournament arcs can get stretched dangerously long for quite arbitrary reasons. If other plot-points are put on hold too long or too much in favor of tournaments, it could upset the show's pacing and alienate what attracted people to the story in the first place. Also, when used as filler it tends to get the butt-end of the budget, and tourney episodes will suffer from really obvious camera tricks and costcutting in an attempt at balance along with its time stretching. Usually not the case in a manga though, as the reader still enjoys incredibly detailed and attractive fight scenes and character development.

Tournaments are almost always single-elimination; the characters will not face the same opponent more than once. Proper seeding will be entirely ignored, and yet even so the hero will always find himself facing tougher and tougher opponents every round. His final opponent will probably be The Rival or a Big Bad (Possibly even the tournament sponsor himself after his plan is revealed) or his Dragon (in case the work is in the fantasy genre, it might even be an actual one, perhaps even in both senses of the word). Sometimes, other characters will get A Day in the Limelight to focus on their fights; in which case they're probably in a Plot Tailored to the Party. Often this will be an ally of the main protagonist but it may also be The Rival or a sympathetic Anti-Villain.

If the hero is the only focus of the Tournament Arc he will often be distinguished by his unwillingness to seriously hurt his opponent or violate Flexible Tourney Rules, and sympathy for his opponent's situation no matter how violent or nasty they may seem to be. The hero's final opponent, on the other hand, may actually kill opponents, often "by accident", even if the tournament is not supposed to be to the death. On the other hand, it may be an anything-goes, Bloodsport type of deal, and the hero may be a Combat Pragmatist who kills if it improves the odds of him living.

If the tournament is a sub-plot in a video game and not the focus of the story it is the Inevitable Tournament.