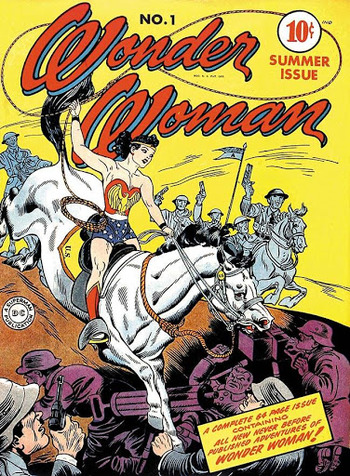 "All our hopes are pinned upon you, And the magic that you do. Stop a bullet cold, Make the Axis fold, Change their minds, And change the world!"

A complete 64 page issue containing all new never before published adventures of Wonder Woman!
- The cover

Wonder Woman #1 is the debut issue of Wonder Woman's first self-titled series published by DC Comics (then known as National Comics) in June of 1942. All Wonder Woman stories are written by William Moulton Marston (under the pen name "Charles Moulton") and drawn by Harry G. Peter, while the "Wonder Women of History" feature is written by Alice Marble with art by Sheldon Moldoff.
Advertisement:

The issue contains the first appearance of Greek God of War, Ares (here called "Mars", his Roman name), who would go on to be Diana's longest lasting foe and introduces the concept of Diana being born from clay which had been sculpted into a baby girl by her mother.

For the chronological debut of Wonder Woman, see All-Star Comics #8 and it's continuation in Sensation Comics #1

The Origin of Wonder Woman

Wonder Woman Goes to the Circus

The Greatest Feat of Daring In Human History