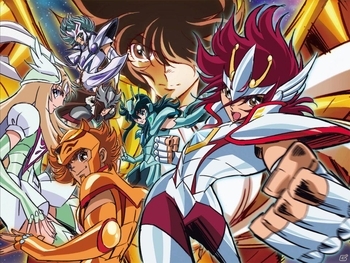 Have you ever felt your own Cosmo?
Advertisement:

An entry in the Saint Seiya franchise, which aired from April 1st, 2012 to March 30th, 2014. It follows a new generation of Saints, and the main character is Pegasus Kouga, who seems to be very much like Seiya in terms of personality. Seiya himself also appears as a Gold Saint. Saori Kido is still present, as the goddess Athena; she also raised Kouga as a parent. She is kidnapped by the god Mars, leaving Kouga and his fellow Saints to save her. Other Saints include: Aquila Yuna, Lionet Souma, Dragon Ryuhou, Orion Eden and Wolf Haruto.

The production staff is composed of big names such as: Yoshihiko Umakoshi (character designer of Ojamajo Doremi, Casshern Sins and HeartCatch Pretty Cure!), Shigeyasu Yamauchi (director of the original series), and others.

Following the relative success of Saint Seiya: Sanctuary Battle, Namco Bandai announced that a game based on the show called Saint Seiya Omega: Ultimate Cosmo for the PlayStation Portable. It was released on November 2012, and featured many of the characters from the anime and an original story. You can see a trailer here