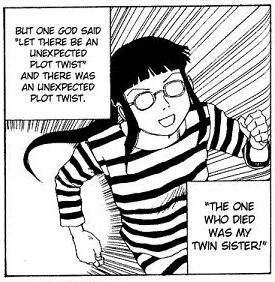 When a beloved character is killed and the writers are serious about it, their only option for the sequel is to bring them back as their hitherto-unseen identical twin sibling.

Don't try this in Real Life. In fact this should probably go on the Evil Overlord List, because that's not how genetics works guys. Real identical twins can be as different in personality as any other siblings: they just LOOK the same. While they might share some similar preferences (there's a great story told in a lot of parenting books about twin boys that loved cinnamon) or even say similar things: they are two completely different people. One could be straight, and the other gay: one could be a killer, and the other a committed pacifist. They could even eerily manifest personality traits of two very different ancestors leading them to become nemeses. This also applies to clones. Genetics are just the foundation of who we are: you can build two completely different houses on the same foundation.

Genetically identical to Twin Switch and Cloning Gambit, and the logical extreme of Suspiciously Similar Substitute. Not to be confused with Making Use of the Twin, which is when an actor's real life twin is used during a production. Compare Actually a Doombot, Doppelgänger Replacement Love Interest and Opening a Can of Clones. Contrast Angsty Surviving Twin and Replacement Goldfish. May be paired with Hidden Backup Prince.

As discussed above, the Backup Twin trope can also be used in sci-fi settings with a clone, an identical alternate self of a character from an Alternate Universe or a near-past twin/future self from the past/future.