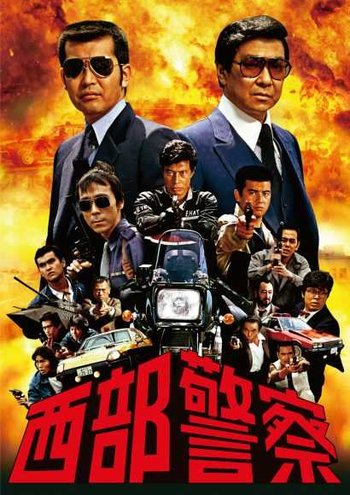 Seibu Keisatsu (Kanji: 西部警察, literally "Western Police"), was a Japanese Cop Show that ran for three series note Since Japanese television doesn't use the seasonal format like in Western primetime shows, a "series" counts as a season. and 236 episodes on the TV Asahi network from 1979 to 1984. It chronicled the exploits of the Daimon Force, a special flying squad of the the Tokyo Metropolitan Police's Western Police division. The force is commanded by Sergeant Keisaku Daimon and Section Chief Kenzo Kogure, played by veteran Japanese action stars Tetsuya Watari and Yujiro Ishihara, respectively.
Advertisement:

What made this series stand out amongst all other Japanese, and indeed, Cop Shows in general, is its over-the-top action sequences that rivalled, and sometimes surpassed the other great action movies of the time, to the extent that the show was billed as a "Concrete Western". To put it in perspective, imagine if Die Hard, Terminator 2: Judgment Day, Speed and Lethal Weapon had their production values transposed into a weekly primetime television series. And to drive home the point, it was estimated at one point the show had wrecked 4680 vehicles, used 4.8 tons of explosives, and destroyed 320 buildings.

The series became massively popular in Japan during its time on the air and is still so to this day; most of the show's Cool Cars were once on display at a museum celebrating the life and legend of Yujiro Ishihara. they were then donated to the city of Otaru, where it was located.