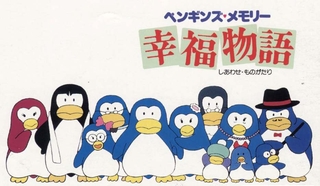 Mike is a sensitive soul that has seen too much. His story begins with him in the midst of the Delta War, a in-universe analogy to the reallife Vietnam War, when this poetry-loving individual sees the horrors of war first-hand. While he survives and gets discharged after injury, several friends don't make it. Shell-shocked, he tries to find his place in the world, becoming a drifter, participating in underground fighting rings, and acting generally numb to the world until he settles down in a nice, quiet town to take care of their library. There, he falls in love, contends with a love rival, and discovers that running away from his problems only results in them exploding in his face.

It's very poignant. Very serious. And every single character is a cute penguin.

, this movie is one of the most jarring things to watch, as you see penguins that appear like they belong in a children's show with a script that is on par, in both content and tone, with The Deer Hunter. It also features the song "Sweet Memories," by Seiko Matsuda, one of the all-time most successful idol singers in Japan.

Nearly impossible to find these days even in Japan, and the inherent Mood Whiplash pretty much ensures that there will be No Export for You. However, it is quite easy to find (in full) on YouTube.