Film / You Only Live Twice 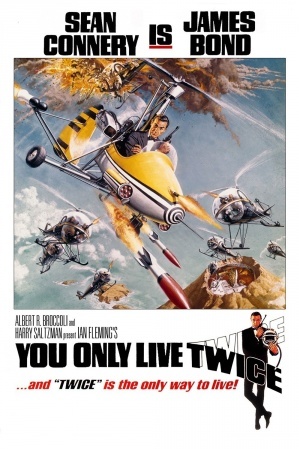 One life for yourself, and one for your dreams...
"Me? I never take any risks."
— James Bond
Advertisement:

The One in Japan.

You Only Live Twice is the fifth James Bond film by Eon Productions, the first to be directed by Lewis Gilbert, and the fifth starring Sean Connery. It came out on June 13, 1967 in the UK. Nancy Sinatra performed the Title Theme Tune.

After Bond fakes his death to fall off the radar, he is sent to Japan to investigate SPECTRE's latest plot to spark a nuclear war by interfering in The Space Race. A little known fact about it is that the screenplay was written by children's book writer Roald Dahl, a good friend of Ian Fleming.

Notably, this was the first film to deviate significantly from the source novel, which has Bond, still reeling from the tragic events of On Her Majesty's Secret Service, being sent by M on an extremely tricky diplomatic mission to Japan in an attempt to shake him out of his Heroic BSoD. The novel was considered to be unfilmable, so they had to almost completely rewrite the plot. Apart from the Japanese setting, the basic characters of Tiger Tanaka and Dikko Henderson (both of whom were portrayed completely differently in the film), and Blofeld as the villain, it has little in common with its film adaptation.

Many of the most widely known and celebrated Bond tropes come from this movie, including Ken Adam's giant volcano set. Most famous, however, is the genre-defining performance from Donald Pleasence as Blofeld, complete with a fluffy white cat to stroke - many people are surprised to be told this is actually the only one Pleasence is in.

Preceded by Thunderball and followed by On Her Majesty's Secret Service with George Lazenby temporarily taking the role from Connery.