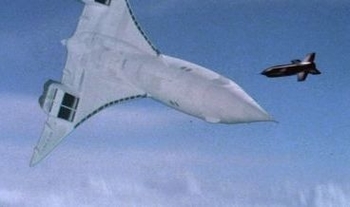 Concorde, Su-27, what the hell's the difference?
Advertisement:

Aircraft, air combat, aviation technology, pilot procedures and airport operations in general are often depicted incorrectly in media. As with many technical fields and sciences, this is usually only noticed by those who work in aviation in some capacity, or have an expressed interest and knowledge about it—but don't worry, most of them will tell you in long tirades exactly where that show got it wrong.

This trope is most certainly not limited to aviation—for the naval equivalent, see Artistic License – Ships, for railroading examples see Just Train Wrong, and for military vehicles and regular cars see Tanks, but No Tanks and Artistic License – Cars respectively. A subtrope is Every Helicopter Is a Huey.

Being a flight service hosted by Gremlins, Gremlin Air isn't up to code.

Being a flight service hosted by Gremlins, Gremlin Air isn't up to code.