Tanks, but No Tanks 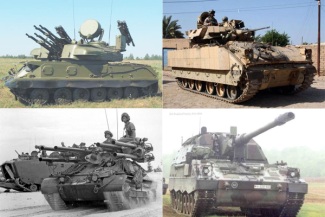 Writers often play fast and loose when it comes to vehicles. They are usually Just Plane Wrong, and use artistic license when it comes to ships. This applies to armored vehicles as much as anything else, either getting details wrong or using stand-ins.

One of the most common mistakes is to treat all armored vehicles as tanks. Armored cars, self-propelled guns, armored personnel carriers and several other types of armored fighting vehicles can be and frequently are misidentified as tanks, just as every warship is a "battleship" to most civilians. In real life all of these vehicle types and more are commonly lumped together under the catch-all term "Armored Fighting Vehicles" which is usually contracted to just "armor" or, if you want to be all snooty about it, AFV (no relation). Despite the common logic of "if it looks like a tank, acts like a tank, smells like a tank, it's a tank", many AFVs that look like tanks don't fit the definition, as tanks are usually characterized by being more of a product of old warfare, therefore way more heavily armoured and generally built to take the brunt of enemy fire than their AFV cousins, which usually possess lighter armour and rely more on indirect combat. Of course, this makes tanks rather expensive to make and maintain compared to other armoured vehicles, which is why we're seeing fewer actual tanks portrayed by the media these days.

In most war films, particularly those set in the Second World War, historical tanks and armored vehicles will be replaced by either modern or more widely available contemporary vehicles that have either been painted in appropriate (or at least stereotypical) color schemes or given cosmetic makeovers to disguise their foreign or anachronistic features. The amount of effort that goes into this varies rather wildly.

There are many very good reasons for this. Firstly, most survivors are historical artifacts belonging to museums and obviously cannot be used recklessly or destroyed. Moreover, many types of antique armored vehicles are actually quite scarce, and some were quite rare in the first place - the WWII Axis were the worst offenders as they favoured shorter production runs and a far greater number of variants. Just 492 King Tiger panzers were produced, as against 47,000 M4 Sherman tanks (all variants), and many contemporary Italian or Japanese vehicles were produced in even smaller numbers. In many cases surviving examples aren't available (e.g. submerged in a Belarussian swamp) or simply don't exist due to the ravages of combat, the temptations of scrapping/salvage, and the passage of time.

Next, as the Sherman production numbers above suggest, Anglo-American filmmakers naturally took advantage of the huge glut of cheap surplus U.S. Army equipment in the immediate postwar period. If a studio has running vehicles in their prop inventory that are available for filming without much hassle, then simple convenience means they'll get used, accurate or not. These days, most armored fighting vehicles that don't meet their end on the battlefield will probably be scrapped before anyone else can get their hands on them. Tanks have never been particularly attractive on the surplus market since they are huge, heavy, fuel-guzzling lumps of steel that can easily cost more to restore and preserve than recycle.

Even contemporary vehicles in operating condition can be prohibitively hard to find and incredibly expensive to hire, transport and maintain for filming. After all, tanks tend to be just so flipping big and in part because military vehicle collectors are often understandably leery of renting their rare and often irreplaceable treasures.

Then there's the matter of Real Life politics, where vehicles you'd ideally want for realism simply can't be obtained at all since they're currently being used or held by an unfriendly power. It's easily forgotten today that prior to Soviet collapse, getting realistic Soviet or Eastern Bloc military vehicles for filming many a Cold War thriller was darn near impossible unless you were an Eastern Bloc filmmaker. Whereas today, you can just phone the Russians and ask them nicely (and offer to pay cash up front).

Similar to its sister tropes, this one happens out of practicality more than anything else, especially if you're not Backed by the Pentagon and just don't want reality to get in the way of Tank Goodness. Just find something vaguely tank-like, add a coat of stereotypical (but historically inaccurate) panzer gray paint and a few crosses and voila! instant Tiger. And—let's be honest here—aside from a few vehicle enthusiasts and history buffs, most viewers wouldn't even notice (or care), anyway. If it has tracks and a gun, it's a tank as far as they are concerned and it doesn't violate their Willing Suspension of Disbelief. To those who know what to look for, however, it can quite jarringly break it.

For producers who care, there are a number of ways around it. One is to use surplus or 'backup tanks' from modern armies such as Russia or Spain: Most T-34 and Sherman tanks used in WWII films were not actually from the war but modernized vehicles from the immediate postwar period. Another is to take a more common modern or contemporary vehicle and give it a cosmetic makeover to give it the appearance of the correct historic vehicle; sometimes these conversions can be quite sophisticated with only a few detail differences such as turret location and suspension design that only dedicated military vehicle enthusiasts would likely notice (these folk are often called "rivet counters" in the trade and are usually considered to be very annoying and hard-to-please people). Finally, there are always models of both the real and the Computer Generated variety, which naturally come with their own sorts of problems.

Feel free to post aversions here, as they're rather rare and always a pleasure to see. NOTE: This is NOT to be confused with This game right here

For information on what qualifies as a tank and other armored vehicles, see Armored Fighting Vehicles.