If It Bleeds, It Leads 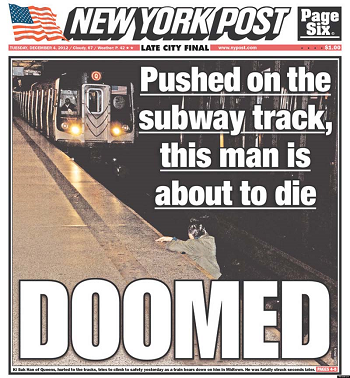 "I'll tell you what I'm going to do. I'm going to blow my brains out right on this program a week from today. So, tune in next Tuesday. That'll give the public relations people a week to promote the show, and we ought to get a hell of a rating with that."
— Howard Beale, Network
Advertisement:

A basic fact in the news media is that, if a story involves a brutal death or injury of some kind (or the likelihood of it), it is likely to get higher ratings. The more lurid the story, the better its chances of being the ratings leader. Natural disasters, bank robberies, shootouts, rapes, serial killers, Gangbangers, school violence, and animal maulings all draw an army of news vans the same way that a limping gazelle draws a pride of lions, except the gazelle is already dead and the lions are broadcasting images of its dead body to thousands, if not millions. By doing so, the news media are following a decades-old mantra: "if it bleeds, it leads!"

This mantra is deeply ingrained in journalistic norms. Newsworthiness is determined by several factors, and death/destruction fulfills many of them a lot better than news about society working its wonders another day. Also, because getting information on them is easy (through the police or government agencies via press releases) and since they take place on public streets where permits or business permission are never required to film near, they are generally rather cheap to cover. They also tend to provide flashy visuals. As a result of all this, Accentuate the Negative tends to be in full effect at many news desks. Just look at your average day's worth of coverage from CNN, Fox News or your nightly News Broadcast and count the number of stories (or rather, the amount of coverage) given to good news rather than disaster and criticism.

have suggested that coverage like this, focusing on negative stories of war, death, and destruction rather than the positive things that are happening in society is responsible for making people cynical about the world around them. People who watch the news start to feel that the world is going to hell in a handbasket, and give up on the idea that society's problems can be fixed. In addition, when the media obsess over violent crimes, deeper problems with society (such as cities running out of money

Another, even darker effect of the news media's obsession with violence — and the one that is often emphasized in fiction — is the kind of message it sends out to impressionable viewers. By glorifying the actions of violent criminals, the media tell viewers, "Hey, if you go out and fire a machine gun into a crowd of little children, you too can make the national news!" Critics of this type of reporting often point out that it's hypocritical for the news media to accuse violent movies, music, and video games of making people violent when they're indulging in far more grisly and true-to-life stuff every night at 11 — stuff that is being plastered over countless TV screens, implicitly turning the perpetrators into celebrities. Additionally, it provides terrorists and other assorted nutjobs a very convenient stage from which to spread fear and their political agendas by way of violence.

The entire reason why Missing White Woman Syndrome exists, as well as the reason why the crimes on most Crime and Punishment Series are Always Murder. The Immoral Journalist is typically one of the most ardent believers in this concept. Compare You Can Panic Now, Could This Happen to You?. Contrast Human-Interest Story. When used in fiction, it's often a sign that the news outlet indulging in it is a Strawman News Media. Has nothing to do with actual trails of blood...

Compare and contrast Yet Another Baby Panda, when viewer interest is teased by a cute fluffy story that usually comes at the end.