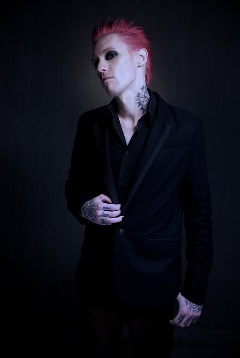 Bret, and all his creepiness.
Advertisement:

Bret Autrey is the only member of the Michigan based electronic, heavy metal, dubstep, and a bunch of other genres band Blue Stahli. He started out under the alias VOXiS and released his first ever album called Darkeworld Project One which caught the attention of the FiXT labelhead, Klayton, who worked on his first instrumental album titled Antisleep Vol. 1. Three years later, Bret managed to put out his first vocal based Self-Titled Album to commercial and critical success. His music has been used in plenty of video games, trailers, and tv shows. As time went on, Bret became one of the more famous members of the FiXT team and defined himself as one of the weirdest people on the label, but for reasons we won't discuss here, he has since left the label and is now self-releasing his work. He also has a YouTube Page

where he answers questions, posts his music, tell people about stuff he's selling, gives updates, and other good stuff.

Blue Stahli himself was compared to Celldweller a lot at first due to the fact they're both one man heavy metal electronic bands fronted by guys with red hair who writes songs with oddly sci fi-ish themes and lyrics, but as time has gone on, people have realized how different they really are in terms of vocals, music and personality.