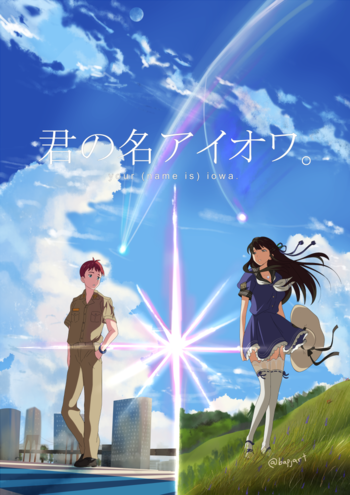 I have finally remembered you, whom I am about to lose yet again.
Advertisement:

Kimi no Na Iowa., otherwise your (name is) Iowa., is a KanColle/Your Name Alternate Universe, Continuation and Fusion Fic cowritten by WarpObscura and max_and_emilytate, with art by Be-ta, Hiroki Ree and Melisaongmiqin.

It is available at Archive Of Our Own

. The AO3 and FF.Net versions are uncensored and contain content that are borderline for SB or SV, albeit nothing explicit.

Warning: Unavoidable Late Arrival Spoilers for your name., its supplementary material - especially Another Side: Earthbound - and the rest of Makoto Shinkai's filmography follow!

A small town girl, dissatisfied with rural life and her miko duties to her family shrine, wishes to become a handsome city boy in her next life. The next morning, her wish comes true in an apparent dream. However, she eventually discovers that it isn't a dream; she has been swapping bodies with him. As they work on improving each others' lives, however, the swapping abruptly stops one day. On a trip into the country to find her, he discovers a shocking truth: She was killed three years ago when a passing comet split off a fragment that crashed into her town. A desperate appeal gives him the chance to Set Right What Once Went Wrong, but circumstances conspire to separate them once more, and it is not till years later that they reunite.

Taki Tachibana and Mitsuha Miyamizu's story ends when they finally reunite on a certain set of stairs. In another universe, though, Uileag Greer and Ayaka Godai will discover that the gods are not done playing with them. Dark forces emerge from the ocean depths to assail mankind, and warships of old return in human form to defend us. An old lesson about how one might encounter something not quite human when the Veil between worlds weakens at twilight ends up hitting a little too close to home when she learns that she is the USS Iowa reborn as flesh and blood, specifically the Pacific: World War II U.S. Navy Shipgirls version thereof.