Literature / Darker Than You Think 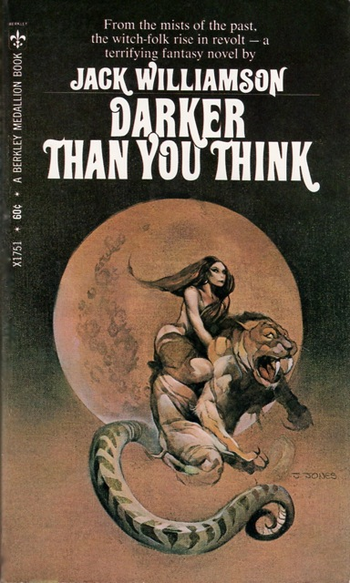 Archaeologist Dr. Lamarck Mondrick has just returned to the United States after a two year expedition in Mongolia. He immediately calls for a press conference to announce his findings, which he considers of dire importance to the entire world. However, in the middle of his announcement, he suddenly collapses and dies.

Newspaper reporter Will Barbee, a former student and friend of Dr. Mondrick, was in attendance at the press conference. Though a coroner attributes his death to natural causes, Barbee begins to suspect foul play. Things become stranger during a dinner date with rival journalist April Bell, in which she claims to be a witch. He is initially skeptical of her claims of supernatural power, but he soon begins experiencing vivid dreams of transformation, magic, and murder.

When Barbee realizes his dreams bear a strong resemblance to the increasingly tragic events surrounding him, he finds himself questioning his sanity, and his role in the secret conflict in which he's become involved.

Darker Than You Think contains examples of: