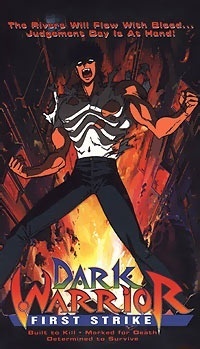 Dark Warrior (Makyuu Senjo) is a Science Fiction novel series by Japanese author Masaru Takeshima. It was published from 1986 to 1989, and received two OVA episodes in 1991.
Advertisement:

Joe Takagami is a meek computer genius working for the Rockford Corporation in Silicon Valley and waiting for a Nobel prize, but his life is suddenly changed when his girlfriend mysteriously stops recognizing him. When hacks into a top secret computer system in search of information, Joe discovers evidence of a secret government experiment related to the corporation and himself, and he soon finds himself running for his life, chased by brutal bionic hitmen. Then his supposed best friend and coworker, Lloyd, gives him the big reveal: Takagami is actually a clone meant to become a human weapon of mass destruction. Denying such fate, he initiates a war against Rockford and its mooks.

The OVA is licensed in the USA and United Kingdom by Manga Entertainment.