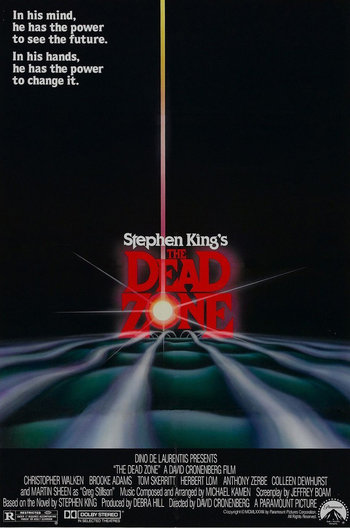 The Dead Zone is a 1979 sci-fi/thriller novel by Stephen King. It has the distinction of being entirely planned from the start unlike his usual Writing by the Seat of Your Pants, and is the only time he tried this and ended up liking the result.

A high school teacher named Johnny Smith is left in a coma for four and a half years following a car accident — only to discover when he wakes up that, while he has suffered slight brain damage creating a "dead zone" where certain concepts are inaccessible, he has also gone from having occasional flashes of precognition, to having a powerful form of psychometry. Now, whenever he touches something or someone, Johnny may have a psychic vision of the past, present or a possible future. As he comes to terms with all that has happened in the missing five years of his life and the notoriety he gains with his abilities, he finds himself trying to stop the election of Greg Stillson, an up-and-coming politician whom Johnny foresees will cause a nuclear apocalypse.

The story has been adapted twice into visual media. The 1983 film stars Christopher Walken as Johnny and Martin Sheen as Stillson and was directed by David Cronenberg. In 2002, a television series based loosely on the novel aired on the USA Network, starring Anthony Michael Hall as Smith.

Not to be confused with the Dragon Ball Z movie Dead Zone.

The Dead Zone provides examples of the following tropes:

Tropes specific to the movie: