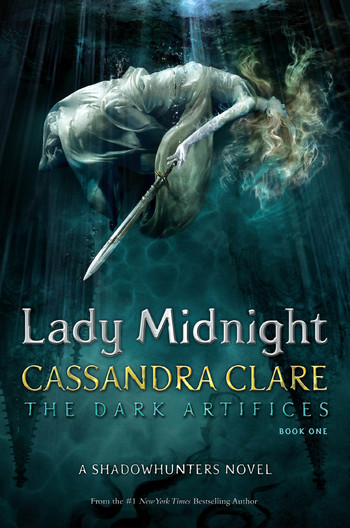 The punishment for the contravention of [the parabatai law] shall be, at the discretion of the Clave: the separation of the parabatai in question from each other, exile from their families, and should the criminal behavior continue, the stripping of their Marks and their expulsion from the Nephilim. Never again shall they be Shadowhunters.
So it is decreed by Raziel.
Sed lex, dura lex. The Law is hard, but it is the Law.
Advertisement:

A Young Adult Literature, Urban Fantasy trilogy by Cassandra Clare. The Dark Artifices is the sequel to The Mortal Instruments, her six-book, bestselling writing debut, as well as the third series (or fourth in chronological order) in the overarching The Shadowhunter Chronicles universe.

Since her parents were killed during the Dark War, Emma Carstairs has been living at the Los Angeles Institute alongside the Blackthorn family - her parabatai and best friend since childhood, Julian, and his four younger siblings - under the tutelage of their uncle Arthur, who is the head of the Institute. The Clave, which is the governing body of the Shadowhunter community, believes Emma's parents were casualties of the war. Emma has spent the five years since convinced they were killed for different reasons, and conducting an investigation of her own.

When she comes across a series of supernatural murders with the same signature as her parents', it will cause the Faeries - a group of Downworlders disgraced in the eyes of the law for their involvement on the wrong side of the Dark War - to insert themselves into the investigation. Now the Blackthorns have to solve the murders on a tight deadline and under top secrecy if they want to get their older brother Mark back, and Emma will come closer than she's ever been to the truth behind her parents' murder. Emma also struggles on her relationship with Julian, whom she begins to love in a romantic way, something that is forbidden among parabatai.

The first edition of Lady Midnight and Queen of Air and Darkness each contains a short story, A Long Conversation and A Love That Never Tires, respectively, that focus on characters from The Mortal Instruments series. The former was released as a separate e-book two months after release.

A Long Conversation provides examples of: