All Myths Are True 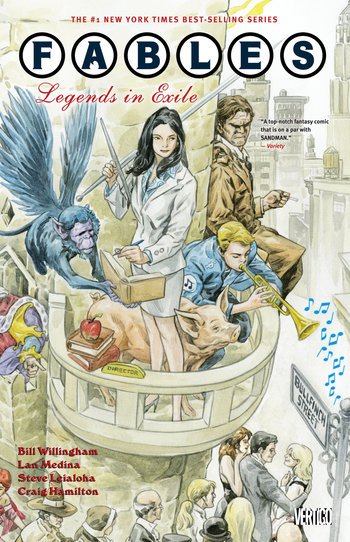 Snow White, The Big Bad Wolf, a flying monkey, a little pig, Little Boy Blue, Beauty and the Beast...yup, the gang's all here.
"Believe what?" asked Shadow. "What should I believe?"
"Everything," roared the buffalo man.
— American Gods

In fantasy, all myths, legends, and folk tales are either accurate descriptions of past events or accurate predictions of the future.

If the hero's got to do something Because Destiny Says So, these are the official mandates that forces them to do it. Saying "It's just a myth" usually marks a jaded skeptic that has lost all faith in the world or a Muggle knee-deep in what's going to hit the fan. If a character tells the hero a story and then adds: "but it's probably just an old fairy-tale" — you can bet anything it's completely true and very soon, the hero will see firsthand whatever the story was about.

And Man Grew Proud, Domino Revelation, and Prophecies Are Always Right are SubTropes of this. For versions where the myth is based on truth but people got the details wrong, see God Guise, Cargo Cult, Ancient Astronauts, Physical God, Sufficiently Advanced Alien, and A God Am I. If this treatment is given to only one pantheon/religion/what-have-you, see A Mythology Is True. For characters who might live in a world where All Myths Are True and despite solid evidence don't believe it, see Flat-Earth Atheist.

For the scientific counterpart, see All Theories Are True. For the conspiracy nut, there's the Conspiracy Kitchen Sink. For the video game rumor counterpart, see Infallible Babble. Someone with the tendency to exclaim "That can't exist!" in one of these settings may suffer from Arbitrary Skepticism.

A not uncommon variant of this is to have only ancient myths be explicitly true and shown on screen, with the truth of modern religions going unexamined or remaining ambiguous; this is done for reasons similar to No Such Thing as Wizard Jesus, where writers avoid touching on religions with significant numbers of modern adherents in order to avoid the controversy that would come from putting them on equal footing with myths few modern readers treat seriously.

This goes hand in hand with The Law of Conservation of Detail: if a myth is mentioned in a show, it should be relevant to the plot, and the myth being true will certainly help with that. See also The Legend of Chekhov.

Not to be confused with Clap Your Hands If You Believe (and its sub-trope Gods Need Prayer Badly), where believing in a myth makes it true. One Myth to Explain Them All is if they all stem from the same source (aliens, wizards, etc). If it's the myths in our universe that are treated as all being true, then that's a Crossover Cosmology or a Fantasy Kitchen Sink.

Alternative Title(s): All Mythology Is True