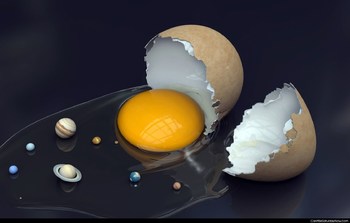 A human mind can only contain a fraction of what you are.
Advertisement:

" is a 2009 short story which launched the career of Andy Weir. It has been translated into over 30 languages, and was the basis for the rapper Logic's 2017 album Everybody

based on the story.

The story picks up immediately after the protagonist (only identified by the pronoun "you") has died, and is now talking to God. As "you" and God converse before you set off to begin your next life, God explains the nature of life, death, and the universe itself. By the story's end, it is revealed that "you" and God are the only beings in all the universe. Every human being in the world is just a different incarnation of "you", and every act, good or evil, done to others, is good or evil done to oneself. The whole universe is functionally akin to an egg; "you" are also destined to "hatch" into Godhood, but first you must mature by living every life. From there, God sends "you" on your way.

"The Egg" contains examples of: