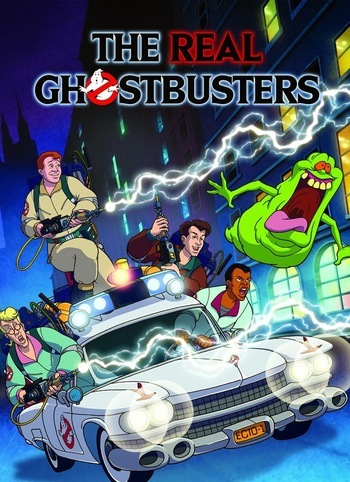 "Who ya gonna call?"
Advertisement:

Within a few years, Columbia Pictures decided there was money in an Animated Series based on the 1984 supernatural comedy Ghostbusters and the further adventures of its four paranormal investigators. Columbia partnered with DIC Entertainment to make it happen.

The problem was that there was already a Filmation cartoon in development called Ghostbusters, a sequel to the 1975 live-action series The Ghost Busters about a pair of noir-style detectives (and their gorilla?) who battle supernatural forces. Filmation's Ghostbusters was a flop, the victim of mistiming: kids were upset that these guys weren't the 'real' Ghostbusters. In response, DiC launched The Real Ghostbusters, both to distinguish it from the Filmation property and to imply that the Filmation Ghostbusters were phonies. The two animated series debuted in the same year, furthering the confusion.

The main characters from the film (with the notable exception of Sigourney Weaver's character) are all present. To get around having to buy the rights to Bill Murray's likeness et al., the mortal characters are each given new faces: Egon has a spectacular blond pompadour, Ray is a stocky redhead, Winston is clean-shaven, and Venkman is overhauled to make him into a devilish twenty-something instead of a middle-aged, balding Bill Murray. Janine's April O'Neil-esque makeover was so steamy, her hair color, makeup, and hipper clothes were incorporated into the live-action Ghostbusters II. Aside from their new color-coded uniforms and slightly-redesigned equipment (their old ones were damaged in the fight with Gozer), the team retain their personalities, at least in the beginning. Slimer, the unintelligible green ghost who "slimed" Venkman in the first film,note His original nickname in the first movie was "Onionhead". was included in the regular cast as a comic relief Non-Human Sidekick.

The cartoon focuses on the day-to-day busting that the movie relegated to a montage; there is no over-arching villain or hint of larger forces at work, although some of the ghosts come back for a second try. Not all the ghosts and other supernatural entities are evil: On occasion, the heroes "bust" the ghosts simply by helping them complete their Unfinished Business, while others enlist the Ghostbusters' help or actually want to be busted, as the Ghostbusters' containment unit approximates 'resting in peace' enough to satisfy them.

Voice actors include Garfield and Friends' Lorenzo Music as Venkman (it has not escaped comment that Murray would eventually voice a CGI Garfield), Full House's Dave Coulier as Venkman in later seasons, Arsenio Hall as Winston, and Maurice LaMarche (as Egon), Frank Welker (as Ray and Slimer), and Laura Summer as Janine (in early seasons), eventually replaced by Kath Soucie. The writers included J. Michael Straczynski, sci-fi author and Star Trek: The Original Series contributor David Gerrold, and the co-creators of 2002's Kim Possible.

Despite the mega-success of its first few seasons, things began to fall apart during the build-up to Ghostbusters II. Thanks to invoked Executive Meddling, the cartoon was renamed Slimer and the Real Ghostbusters (executives had fallen in love with the cuddly cartoon version of Slimer) and the show's horror was downplayed and replaced by slapstick humor, while Janine's appearance and personality were softened. Later episodes would incorporate trappings from the second movie, including the Mayor's injunction against the team. Louis Tully returned as a supporting character at this time.

Data East released an arcade game based on the show in 1987, and Activision published a Game Boy version in '93. Funnily enough, both games were dolled-up installments.

In 1997 it received a Sequel Series, Extreme Ghostbusters, with a new team and Egon as their mentor.

The Real Ghostbusters provides examples of:

In order to catch the shapeshifting Copycat, the Ghostbusters trick the metamorph into transforming into Slimer, and then, after double-checking which was the real Slimer, trapped it.

Example of:
Tricking the Shapeshifter

In order to catch the shapeshifting Copycat, the Ghostbusters trick the metamorph into transforming into Slimer, and then, after double-checking which was the real Slimer, trapped it.