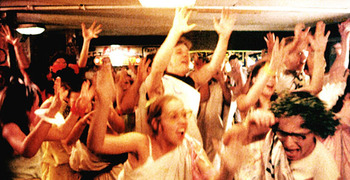 Fiction in which much of the humor comes from fratboys getting highly intoxicated and doing incredibly stupid, risky, and dangerous things and getting away with it. It usually has the main characters as a bunch of loveable rogues pitted against the evil aristocratic old money frathouses or oppressive deans. Expect drinking, Mooning, and panty raids. Lots of panty raids.

May overlap with Stoner Flick. Generally parallels with College Is "High School, Part 2". Almost always includes a Wild Teen Party, with college officials replacing the parents. Often set at a Strawman U. Compare All Guys Want Sorority Women, the stereotyped portrayal of the fraternity's Distaff Counterpart, the sorority. Interestingly a variant of this behaviour also tends to happen in the military, which on base often functions much like a fraternity, only with access to lethal force.

Do not do this stuff in Real Life (please only include fictional examples here); people who do will be in serious legal and disciplinary trouble. After all, (most) college students are legally adults, and these actions have true disruptive consequences.