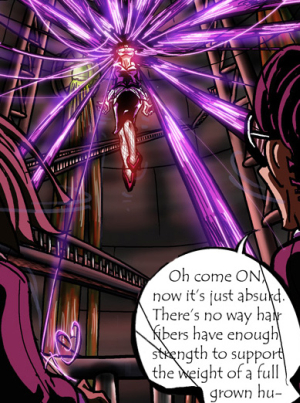 And he's even wrong about that.

Senator Stampingston: Gentlemen, it's clear that we're in a universally precarious situation. Dethklok has summoned a troll.
General Crozier: That's impossible, there's no such thing as trolls.
Senator Stampingston: Then how do you explain the dead unicorns? (The screen behind him shows butchered unicorns)
— Metalocalypse
Advertisement:

The paranormal has a way of creeping into TV shows, even those which don't have a paranormal premise. In real life, being neither strongly skeptical nor accepting of various paranormal forces is the default, and usually a better option than either dogmatic belief or dogmatic skepticism. On TV, characters are far less likely to express any doubt, and those who are skeptical are often treated as naive or ignorant, and the plot will go out of its way to prove them wrong.

For example, a character receives a psychic reading which foretells tragedy. He spends the rest of the episode actively worried about it. Various details foreseen by the psychic are borne out in the episode. A character who challenges the legitimacy of Psychic Powers will often be confronted with at least one detail he can't explain how the psychic knew.

This also comes into play in shows that deal regularly with paranormal subjects. Characters who don't believe in aliens, magic, or whatever, are presented as hopelessly naive. Even when they're proven right about the main conflict being a hoax, something about the situation will turn out to be Real After All.

Ironically the more heavily focused on the paranormal a show is, the less likely this seems to be the case. In settings with a masquerade ordinary people are often depicted as being so utterly skeptical that clear evidence of paranormal goings on is dismissed with a flimsy and wildly implausible 'rational' explanation, which itself is a form of skepticism failure.

There is Truth in Television in that people do believe in "mystical" things without proof. It just depends on exactly which things and who is being asked to believe.

Compare Arbitrary Skepticism, If Jesus, Then Aliens, Flat-Earth Atheist, Religious Russian Roulette, How Unscientific!, and Skeptic No Longer. The most common manifestation of this trope is Psychic Dreams for Everyone. Compare also with Apathy Killed the Cat, where people are curiously un-inquisitive about fantastic things and events.

Contrast with Invisible to Normals and Weirdness Censor in which an alien, a robot and a werewolf can be having a fight in right front of someone's nose and still be ignored or dismissed. Also contrast Puff of Logic, when skepticism causes the subject to be erased from existence.

Turns out magic does exist.

Turns out magic does exist.