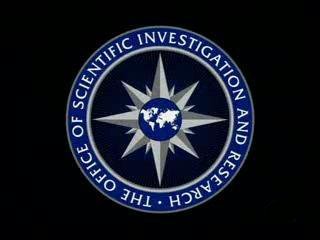 It's more believable with a proper seal.
"These stories are inspired by the actual case files of the Office of Scientific Investigation and Research (O.S.I.R.)."
— Opening Credits
Advertisement:

Psi Factor: Chronicles of the Paranormal is a Canadian science fiction drama television series and aired 88 episodes over four seasons from 1996 to 2000. Dan Aykroyd hosted the show, providing a lead-in talk for each episode and concluding the respective case at the end.

The show deals with the fictional organization "Office of Scientific Investigation and Research" (O.S.I.R.), which investigates a variety of paranormal activities during the course of the show. Whereas the first season mostly features two cases per episode, from season two on the series changes to a more conservative format.

The staff of the investigating team changed over time, with case managers Conner Doyle (Paul Miller) and Curtis Rollins (Maurice Dean Wint) in the first season, who were then replaced by Matt Praeger (Matt Frewer) in the second season. Other main characters are senior data analyst Lindsay Donner (Nancy Anne Sakovich), physicist Peter Axon (Barclay Hope) and Dr. Anton Hendricks (Colin Fox). In Season Four, Hendricks was promoted to director of the O.S.I.R. and was replaced by Mia Stone (Joanne Vannicola), while recurring character Claire Davison (Soo Garay) was promoted to the main cast.

This series provide examples of the following tropes: