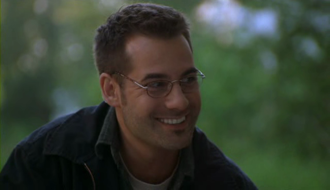 Eventually, he learns to fly.
Advertisement:

For the trope about how God works, see In Mysterious Ways.

Mysterious Ways (2000-2002) was a series seeking to capitalise on the X-Files inspired craze for TV shows dealing with the paranormal. Originally created for PAX, an American Christian TV network; possibly its producers were trying to appeal to a broader audience.

It follows a goofy professor of anthropology in the University of Oregon, who has made it his mission to prove the existence of miracles after he survives an accident. In this quest he is joined by a female doctor at a local hospital, a Goth Girl graduate student/research assistant, and his scruffy dog.