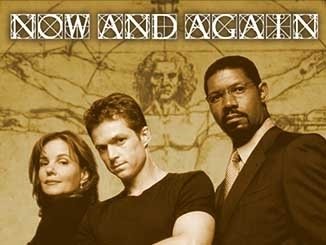 "We only want what we can't have."
"An ordinary man - insurance executive, 45 years old - stumbles to his death on a subway platform in New York City. Or does he? Unbeknownst to his wife or child, his brain is rescued from the accident scene by a secret branch of the United States Government and put into the body of an artificially produced 26-year-old man with the strength of Superman, the speed of Michael Jordan, and the grace of Fred Astaire. The only catch: under penalty of death he can never let anyone from his past know he is still alive. And that, my friends, is a problem... for this man is desperately in love with his wife, his daughter, and his former life."
Advertisement:

Now and Again was a 1999 CBS Science Fiction show. After New York Everyman Michael Wiseman is killed in a subway accident, the U.S. government steals his brain for use in a top secret project to create the perfect specimen. The justification being that although the body could be created, the mind turned out to be more complicated.

Michael is put to work for the government in a new life as Michael Newman, a modern-day Six Million Dollar Man. There's just one catch - he can never contact anyone from his past again. Fate, however, seems to have a way of bringing them together.

The program featured Eric Close as Michael Wiseman and Dennis Haysbert as Dr. Theodore Morris, but its cancellation would leave them free to move on to their most defining roles - Close as an agent on Without a Trace and Haysbert as President David Palmer on 24 (or the Allstate insurance spokesman, take your pick).

The show was cancelled after one season, with high production costs cited as the reason for its cancellation. It was released on DVD in August 2014.

Now and Again features examples of: