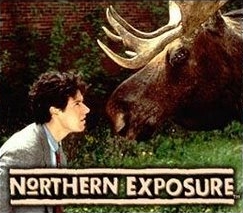 "It's like brother Nietzsche said: being human is a complicated gig, so give that dark knight of the soul a hug and howl the eternal yes."
— Chris in the Morning
Advertisement:

Northern Exposure was a Dramedy that ran on CBS from 1990 to 1995. It is a relatively rare American example of the "Northern"—a more usually Canadian frontier drama akin to The Western, but set in the modern-day Arctic (well, sub-Arctic).

Joel Fleischman (Rob Morrow) is a young doctor from New York City, fresh from med school, who is contractually obliged to practice medicine in the small town of Cicely, Alaska as part of a financial aid package from the state. As Fleischman dreams of escaping Cicely, the locals all seem to be escaping from the rest of the world.

The town's quirky residents include:

The show holds a similarity to Twin Peaks, with its use of extensive dream imagery, fantasy elements, and symbolism to explore its characters, and was one of the most successful "stealth fantasy" shows (in that most fans of the show would never admit that it was a fantasy show) in network television history. In its sixth and final season, Rob Morrow left the show and his character Joel Fleischman was Suspiciously Similar Substituted by Paul Provenza's character Phil Capra.

In late 2018, it was announced that a revival of the series was being mounted by CBS, with Morrow returning to star as Fleischman, but the project continues to be hit with various delays and setbacks, including the 2019 death of series co-creator John Falsey.