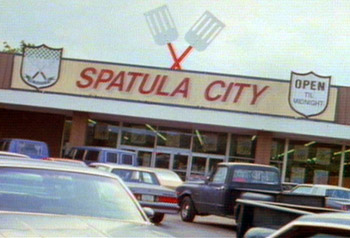 A Severely Specialized Store is a retail outlet that only deals with an incredibly narrow product range, typically one or two items of a very specific type. As this trope is almost always invoked due to Rule of Funny, the store's products will be exactly what the characters need in their moment of crisis (unless it's closed when they get there). How such a business manages to stay in operation, or why the character can't just go to a general-purpose merchant, is never raised.

In fantasy stories, the extremely specialized store might be a fun way to highlight how different the fictional world is. A wizarding world might have wand stores or an Evil Chancellor world might have monocle shops.

An infrequent variation is the inverse of this trope — a store that sells everything except for one thing, typically what the protagonists need to solve the current crisis.