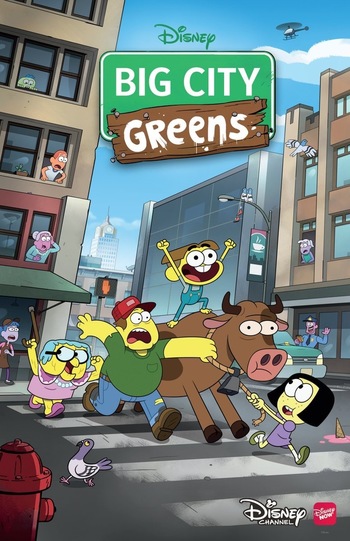 Family sticks together. Even in the Big City... note  Shown above: Cricket Green, Tilly Green, Miss Brenda, Bill Green, Alice Green, Officer Keys, Gloria Sato, and random citizens of Big City.
"I got sweat in my eyes
Lost a bet and got bit by a hundred flies
I fell out a big old tree
Hit every branch and scraped up both my knees
I got chased by dogs, licked by a frog
Got a rash on my legs, dropped a dozen eggs
Advertisement:
I got splinters in seven of ten
And tomorrow, I'll do it all again"
— "Do It All Again"

Big City Greens is an animated comedy series produced for Disney Channel, created by Chris and Shane Houghton (colloquially known as the Houghton Brothers), who both previously worked as writers on Harvey Beaks. Rob Renzetti (My Life as a Teenage Robot) served as an executive producer on the first season. The show premiered June 18, 2018.

The series revolves around the adventures of Cricket Green, a mischievous and enthusiastic country boy who moves to a big city named...well, Big City, along with his family-man father Bill, his placid yet silly sister Tilly, his no-nonsense grandmother Alice, and eventually joined by his reckless and tough divorced mother Nancy, and how his curiosity affects his out-of-place family and the friendship they develop with their neighbors. The show becomes slightly more story-driven as the series progresses, as the Greens must work to protect their farm from various threats that come upon them.

The supporting cast features Remy Remington, Cricket's well-off Black and Nerdy best friend, and Gloria, an antsy and cynical, but ultimately good-hearted girl who works at the coffee shop right next to the Greens' house. The Greens also frequently battle their arch-nemesis, Chip Whistler, the CEO of rival company Wholesome Foods who is jealous of their work, and is always plotting to run the Greens out of Big City for good, but his plans are usually, if not always, thwarted.

The series was greenlit for a second season a month ahead of its premiere which premiered on November 16, 2019. A third season was commissioned on January 13, 2021 and had its Halloween special premiere October 9 the same year, with the season officially premiering on February 13, 2022.

A fourth season, along with a movie exclusive to Disney+, were commissioned on January 21, 2022.

Big City Greens has examples of: